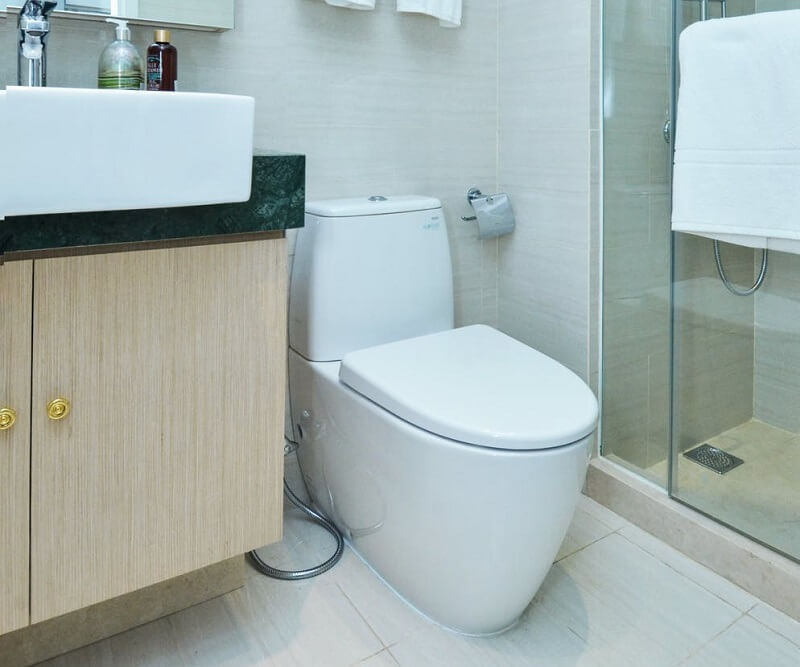 Bathroom Toilet Noise – WHAT IS THAT SOUND?

After spending a substantial amount of time at home in lockdown in Sydney, you may have come across various noises in your household. Toilet noise is one such sound which can be annoying to hear, but it’s also an audible sign your toilet may not be operating at its best.  Let’s explore the common noises toilets may make and what they mean.

Toilet Noise 2: Cistern refilling when no one has used the toilet

The constant refilling noise a cistern can make when no one has used the toilet, also known as ghost flushing, requires an investigation into the valves and rubber washers in the cistern. A plumber can investigate and replace the parts.  While this noise is annoying, it’s also an indicator to get this looked at as soon as possible as it will increase your water usage and therefore your water bill.

A hissing or high squealing sound can often happen when the cistern refills after being flushed. The sound is caused by air moving in the cistern and through the valve. It’s a sign for the inlet valve to be replaced. Ideally, remove the cistern lid to find the location of the sound and organise a replacement of the part.

If you can hear a gurgling sound after flushing the toilet, there may be a problem with the vent.  More commonly, this could be a sign of a blockage.

The blockage may be something caught beyond the trap of the toilet bowl or it could be a blockage further down the sewer line. A simple plunge with a plunger may push the blockage past the trap, but if this doesn’t fix the problem, a plumber will need to be called to investigate and flush out the blockage to put a stop to the gurgling sound in your toilet.

A toilet should typically make a sound only when someone has flushed it. The sound of the flush and the refilling of the cistern are normal noises which are associated with usage of the fixture.

But if the toilet makes sounds during the day or night when it isn’t being used, sourcing where the sound is coming from is a good place to start investigating the cause and rectification.

If toilet noises are getting you down, contact Joe from Gladesville Plumbing. Restore peace in your household with a less noisy toilet. It will make a remarkable difference to the function of your toilet and possibly your water bill.

Designing a New Bathroom?  Here are the Bathroom Trends 2022 Are you planning a bathroom renovation? You will want to know the bathroom trends 2022 has in store. Current trends can be a great jumping...

END_OF_DOCUMENT_TOKEN_TO_BE_REPLACED

How Hard is it to Move a Toilet?

END_OF_DOCUMENT_TOKEN_TO_BE_REPLACED

Bathroom Inspections – When the Building and Pest Guy Won’t Cut It!

Buying a property and wondering about bathroom inspections? Sydney buyers can save money and hassle with this additional service – but do you need one?  Bathroom inspections on newly purchased Sydney properties are becoming a common request before the sale becomes unconditional. If you’ve purchased a property in Sydney, you...

END_OF_DOCUMENT_TOKEN_TO_BE_REPLACED

How To Prevent A Snake In Your Toilet Bowl

Finding a snake in your toilet bowl is the stuff nightmares are made of. It can cause a fright to you as the householder, and it’s the type of code brown plumbers aren’t trained to fix.   It’s important to realise finding a snake...

END_OF_DOCUMENT_TOKEN_TO_BE_REPLACED

What to Consider Before Attempting Toilet Installation

Need a Second Loo? What to Consider Before Attempting Toilet Installation Have you been thinking about installing a second toilet in your home or adding an extra bathroom? There is a lot to consider before hiring...

END_OF_DOCUMENT_TOKEN_TO_BE_REPLACED

How Likely IS It That I’ll Find A Snake In My Toilet Bowl?

We’ve all seen or heard about the movie Snakes on a Plane, but in recent weeks, ‘snake in toilet bowl’ has made the national news.This startling headline is not new, but it is...

END_OF_DOCUMENT_TOKEN_TO_BE_REPLACED

Need A New Shower Plumbed In? Here’s What You Need to Know

A great way to add value to your home is through the addition of an extra shower. The shower is the preferred way for people to wash and it can often be the most...

END_OF_DOCUMENT_TOKEN_TO_BE_REPLACED

The most common reason for a resident to call a plumber is to unblock drains or toilets that have been backed up from the wrong waste being flushed down the pipe. The drainage pipe...

END_OF_DOCUMENT_TOKEN_TO_BE_REPLACED

REPAIR OR RENOVATE? COSTING BATHROOM REPAIRS IN SYDNEY If you’re considering whether to repair or renovate your bathroom, there are many points to factor in before making a decision. Bathroom repairs in Sydney can be...

END_OF_DOCUMENT_TOKEN_TO_BE_REPLACED

What Causes A Leaking Toilet?

Toilets can leak from several different points, including the cistern and the base. It’s important to check for leaks both in and around the toilet to ensure your toilet runs efficiently. A leaking toilet...

END_OF_DOCUMENT_TOKEN_TO_BE_REPLACED

Need A Plumber In Eastwood? Here Is Why You Should Choose Us!

Need A Plumber In Eastwood? Here Is Why You Should Choose Us! Eastwood is a popular Sydney residential suburb. Families love the easy access to local shopping centres and sought-after schools. Young couples take advantage...